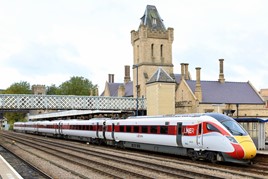 Azumas started serving Lincoln on October 21 as LNER increased the number of trains operated by the Hitachi Class 800/801 fleets.

Five-car bi-mode 800203 was used for the first train, which left the city at 1118 following the launch event.

The introduction of Azumas means LNER will run six trains per day between London King’s Cross and Lincoln by the end of the year; this is up from one per day. These will replace the London-Newark North Gate services.

Suzanne Donnelly, LNER Commercial Director said: “We’re thrilled that Lincoln is the first destination along our route to benefit from additional services with our new Azuma fleet.

“We are confident that our Azuma trains will open up huge economic benefits for the city and wider area."