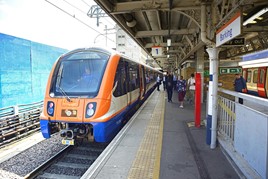 Fourteen months later than planned, London Overground 710261 became the first Class 710/2 to carry passengers when it formed the 1136 Gospel Oak-Barking on May 23.

Built by Bombardier, the Aventras had been due to enter traffic in March 2018, with all of the original order then in traffic on three routes across the capital by last November. However, problems with the Train Control Management System (TCMS) delayed their introduction.

Speaking to RAIL on the first train, Transport for London Director of Rail Jon Fox explained that the ‘710/2s’ were using the 34th version of the software. He said that two Class 710/2s will be in traffic initially, with a third used as spare.

This means that LO can use five trains per day, compared with the three it had been running following the cascade of the diesel Class 172 fleet that had left the route short of trains.

Fox said that driver training was under way, and that as that continued so more trains would enter traffic. He added that TfL was no longer announcing dates for various introductions, as a result of the delays the trains have suffered.

He also said that the TCMS will need further updating for the Class 710/1s, which will be required to operate in multiple on West Anglia inner-suburban trains from Liverpool Street. Asked when they would enter traffic, he said: “Not predicting, but it will be this year.”

As for when the full service will be reintroduced on the Gospel Oak-Barking route, Fox said: “We are saying some time this summer - it will mainly be about having sufficient trains.”