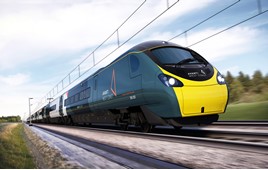 The new West Coast inter-city franchise operator will be known as Avanti West Coast when it takes over from Virgin Trains on December 8.

Avanti (Italian for ‘forward’ or ‘let’s go’) was chosen by Trenitalia and FirstGroup, whose West Coast Partnership joint venture was awarded the contract by the Department for Transport in August to operate services on the West Coast Main Line until at least 2031, with an option for the Secretary of State for Transport to extended this by a further three years.

The new operator must also work with HS2 Ltd and the DfT to develop services on HS2. These had been due to commence running on Phase 1 of the route from London to Birmingham in 2026, although how and when the scheme will proceed is now subject to a government-commissioned review led by former HS2 Ltd Chairman Doug Oakervee (RAIL 892).

On the existing network, Avanti West Coast’s franchise commitments include a £177 million refurbishment of the entire fleet of 56 Class 390 Pendolinos that it has inherited from VT, with 25,000 new seats, more reliable WiFi and improved catering.

Meanwhile, it says that by 2022 it will have introduced 263 more services on the WCML each week, running to a range of new destinations including Gobowen and Llandudno.

The frequency of services between London and Liverpool is also set to rise to two trains per hour. Motherwell will become a major calling point on the WCML, and Walsall will also receive its first inter-city services.

Avanti West Coast is also committed to introducing a new fleet of 23 ‘environmentally friendly’ trains by 2022, to replace its diesel-only Class 221 Super Voyager sets in a move which it says will reduce carbon emissions by 61%.

The new Avanti West Coast brand was unveiled to invited guests at a launch event in Birmingham on November 27.

Ernesto Sicilia, managing director of Trenitalia UK, added: “After our entrance into the British market in 2017 , today marks another step in our ambition to play a positive role in the UK rail industry, in which we see a great future."