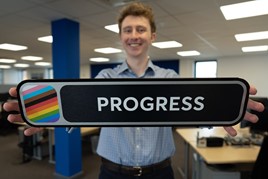 After a competition that attracted more than 1,500 entries, Avanti West Coast’s Pride Train (390119) was named Progress on October 11.

The winning submission came from Edward Hitchon Godfrey, who explained in his entry how the introduction of Pride Trains helped him come out.

“As a young engineer entering the rail industry five years ago, I was struck by the stark contrast between a relatively progressive industry on the surface and the sometimes intolerant views expressed in the background,” he said.

“Trainbows, Pride Trains and events gave me - a closeted bisexual man - the feeling of support within the industry I love to come out at work and to challenge prejudiced views.”

Sarah Copley, AWC Executive Director - Commercial, said: “Within a day of the competition launching, an online campaign was started calling for the livery to be called Progress, highlighting the wider LGBTQ+ community’s love of the Pride Train and recognition of the progress we are making around diversity and inclusion.”