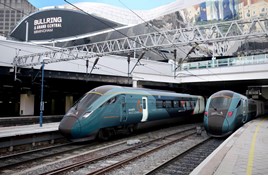 Class 805s and ‘807s’ will be the designation for the Intercity Express Trains ordered by Avanti West Coast from Hitachi Rail Europe.

The ‘807s’ will operate between London Euston, the West Midlands and Liverpool Lime Street, while the ‘805s’ will run from Euston to North Wales. The latter will enable AWC to dispense with its Class 221 Super Voyager fleet.