FROM THE ARCHIVES: Are Britain’s fares really so much higher? 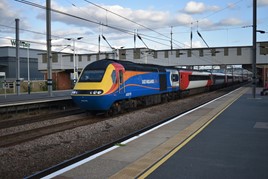 Sitting at my in-laws over Christmas a couple of years ago, a national newspaper contacted me to ask for help with an article comparing UK and European train fares. It was titled ‘How far will £100 get you?’ and was based on the UK’s most expensive Anytime fares. I declined, saying it would be far more interesting - and fairer - to compare prices for similar routes in different countries, booked a month ahead, a day ahead, bought on the day for off-peak travel and bought on the day in peak travel times.

Strangely, I don’t think fairness was what they wanted, so I decided to undertake the simple analysis anyway, if only to see if it showed what I thought it would - namely, that our train fares are often cheaper than comparable countries, unless you have to travel at short notice in the business travel peak periods. The results surprised me, so I’ve repeated the analysis here using 2017 prices.

Incidentally, just as lumping National Express coach fares with TfL London bus fares would make for a very woolly discussion, discussions about rail fares lack focus unless clearly divided into long-distance, inter-city and short-distance/commuter categories. There’s an overlap, of course, and it’s certainly not an exact science, but the commercial, regulatory and social aspects are very different: Journeys of 20 miles are made frequently, often as part of daily journeys to work or college, and are also often made spontaneously or at short notice. Fares regulation applies to peak Anytime fares and season tickets. Journeys of 200 miles are typically made far less frequently, are typically pre-mediated, yield-management and reservation is possible, and in this case the regulated fares are the Off-Peak Returns. One could subdivide fares into more categories of course, but as an absolute minimum I think any fares discussion should consider long and short-distance fares separately.

Short distance/commuter fares are largely subsidised, and broadly speaking it’s a political decision between higher fares with lower subsidy, or lower fares with higher subsidy. As a basic example, if it costs £2,000 a year pro rata to get a commuter to work, we Brits have chosen to charge him or her £1,500 for a season ticket, with £500 in subsidy. We could just as easily have chosen a £1,000 season ticket and a £1,000 subsidy, and many other countries make such lower-fare/higher-subsidy choices. Indeed, there is a powerful clause in each franchise agreement which allows the government to unilaterally vary fares regulation to facilitate such a change at any time, but (again in very simple terms) if the government wants £500 knocked off a season ticket, they have to stump up an additional £500 in subsidy. This then has to be diverted from other things such as schools and hospitals, or provided by additional borrowing or higher taxation. When I comment on cheap Dutch train fares and their smooth pothole-free roads, my Dutch wife responds, “Yes, but the Dutch pay 50% income tax!”

But even so, be careful when you hear fares compared. Paris to Crépy-en-Valois (61km) is €11.90 (£10.11) one-way. London Victoria to Maidstone East (64km) is £21.80 one-way. At face value this seems shocking, but bear in mind that on French regional trains there are no off-peak fares and a round trip is twice the one-way cost. So Paris to Crépy-en-Valois is always €23.80 (£20.11) return, whereas London to Maidstone is only £17.90 with an Off-Peak return after the morning rush hour. Cold comfort for commuters perhaps, but in this case the British route is cheaper. You’ll also usually find British fares compare better with European routes if you consider regional routes away from London.

Here I'm going to focus primarily on long-distance routes, where in the UK both the Anytime (fully-flexible, peak) fares and the cheap Advance fares are unregulated, and set commercially in competition with cars, coaches, and in some cases, domestic flights and other operators. Fare structures are so different in each European country that it’s often like comparing not merely apples and oranges, but entire fruit bowls of widely differing fare types, railcards and approaches to one-way and return journeys.

A professional study could cut through such differences by calculating the Average Fare Paid. This is done by dividing total revenue by total passenger numbers on a given flow, something which could legitimately be compared between countries. Fares and flows could be aggregated further into a fare per km, but even here you’d need to be careful when comparing countries - a network consisting predominantly of short and medium-distance routes might be expected to produce a higher price per km than a network with a high proportion of long-distance routes, both because of a distance taper and because of lower rates per km for yield-managed advance-purchase fares on longer distance flows. But such studies require access to commercially-sensitive revenue data, and with no such luxury at my disposal, the following analysis can only be classed as a straw poll. Nevertheless, I still think it reveals more truths than you read in the papers…

I picked four fairly similar routes: London to Sheffield (265km), Paris to Dijon (287km), Rome to Florence (261km) and Nuremberg to Kassel (265km). In fact, I didn’t pick the first three; the journalist who contacted me had already identified them as comparable, so I simply re-used them with no pre-selection of particularly cheap UK routes or particularly expensive Continental routes on my part. The fourth route was the first inter-city German route of about 265km that I came across while flicking through the German part of the European Rail Timetable (www.europeanrailtimetable.eu).

So, nothing up my sleeve, no cooking the books in my choice of routes - I was doing this for my benefit as much as anything else. I then used www.nationalrail.co.uk for UK prices, www.trainline.eu for French prices, www.trenitalia.com for Italian prices and www.bahn.de for German prices.  ll very simple to do - you can easily try it for yourself using the same or different routes.

1. Booking a month in advance

First of all we’ll try booking a train around midday, one month ahead.

* For fast TGVs. There are several daily TER slow trains with a fixed price of €46.10.

** For fast Frecce trains. There are several slow regional trains taking twice the time, at a fixed price of €29.

So, interestingly, Britain seems to have some of the cheapest long-distance fares in this test, other than Italy. In case you think London-Sheffield is a special case, London-Manchester was £22 on almost all departures that day. London-Leeds varied between £25 and £54, and London-Cardiff between £25.50 and £44.20.

Pre-booking way in advance was always going to be cheaper, but what if you wanted to go tomorrow - we'd easily have the most expensive train fares in Europe, right? I'm sorry to say I thought that might indeed be the case, but the results were surprising.

* For fast TGVs. There are several daily TER slow trains with a fixed price of €46.10.

**  For fast Frecce trains. There are several slow regional trains taking twice the time, with a fixed price of €29.

OK, so that was still pre-booking an Advance ticket wasn't it? What if you just turn up at the station and need to buy a ticket for the next train, then we’re far pricier than Europe, right? Again, I thought we probably would be, but here comes another surprise…

At first glance, the UK is now more expensive for a one-way journey. But hold your horses. For historic reasons a UK Off-Peak Return is only £1 more than a one-way; this was a feature inherited from BR at privatisation and now fossilised by fares regulation (something I’m convinced should be changed – but that’s another story). So a round trip is £75.50, equivalent to £37.75 each way, when in each of the other countries you'd pay double what you see above.  So for a round trip, even a UK walk-up fare can be cheaper than on the Continent, if you avoid the Monday-Friday business peaks. Where did you read that good news in the papers?

East Midland Trains Off-peak tickets are similar in price to West Coast’s, although in fairness you might get a different answer using an East Coast flow, as (again for reasons pre-dating privatisation) East Coast has always had higher Off-Peak fares than other operators.  But you get the general picture!

To complete the picture, what if you just wander into the station and buy a fully-flexible business ticket for the next train? As you may have guessed, the UK is indisputably the most expensive, although this is only for travel in the Monday-Friday business peaks and only around 10%-15% of travellers on major inter-city routes buy these business-priced Anytime fares. The Off-Peak fares referred to in the previous test might typically be bought by 50%-55% of passengers on a major long-distance route, and Advance fares by perhaps 30%-40%.

So the next time you hear that “Britain has the highest rail fares in Europe”, you'll know that this is only a small part of the story, at least on longer-distance routes. The other part of the story - the most important part - is that we have similar or even cheaper fares. The truth is that Britain has the most commercially-aggressive fares in Europe, with the highest full-flex fares designed to extract maximum revenue from peak business travel, along with some of the lowest fares designed to generate revenue by filling empty seats and competing with cars, coaches and planes. This is precisely what airlines have known and have been doing for decades. In fact, the next time anyone tells you that the train fare to Manchester costs more than the air fare to New York, remind them that it doesn’t. I've just checked. For a full-flex economy-class return fare from Heathrow to New York on a flight leaving in an hour’s time, British Airways want £1,810...

Ticketing Team at the Department for Transport. He now runs The Man in