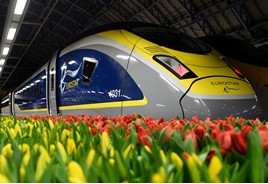 Direct trains from the Netherlands to London will start running from April 30, with tickets available to buy from February 11.

Since 2018 Eurostar has been running trains from London to Amsterdam and Rotterdam, however UK passengers have been unable to return directly, having to change at Brussels and go through passport control.

This was a temporary measure whilst the UK, French, Belgian and Dutch Governments completed an agreement to allow the checks to be carried out on departure in the Netherlands as per other Eurostar routes.

Currently there are three outbound services a day from the UK to the Netherlands. Initially there will be two inbound trains from Amsterdam with the aim of introducing a third and, later, a fourth.

Eurostar Chief Executive Mike Cooper said: “Our services from the UK to the Netherlands have proved very popular with over half a million travellers since launch. Our fully direct service marks an exciting advance for high-speed rail and provides consumers with a comfortable, environmentally friendly alternative to the airlines on one of Europe’s busiest leisure and business routes.”

Cora van Nieuwenhuizen, Minister of Infrastructure and Water Management in the Netherlands, said: “The direct connection makes the train journey to London easier and faster. Checks in Brussels will no longer be necessary, saving travellers an hour of travel time. This way the train really becomes a fully-fledged alternative to the plane.”