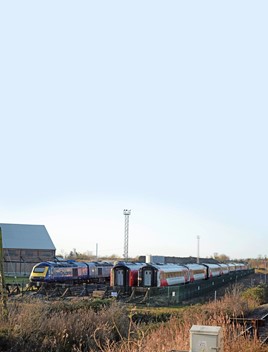 Nearly 200 High Speed Train Mk 3s and more than 20 Class 43 power cars look set to be scrapped in the coming weeks and months.

Angel Trains confirmed to RAIL that a decision on the future of its redundant vehicles is to be made soon, with some having already been out of use for more than a year. A spokesman told RAIL on March 16: “It is increasingly likely that they are to be scrapped.”

Sources at the rolling stock leasing company have previously told RAIL that other than two power cars for CrossCountry and two for component recovery by ScotRail, there had been little interest in the HSTs.

The introduction by GWR and LNER of new Hitachi Class 80x series trains caused the withdrawal of the HSTs, with the final long-distance GWR sets running on May 18 last year (RAIL 880), and the final 2+4 sets last December. LNER finished its use of HSTs on December 15 last year, other than for a four-day charity farewell tour (RAIL 895).

None of the redundant vehicles has dispensation to operate on the national network, as they do not meet accessibility regulations which came into force from January 1.