ANALYSIS: The heat is on… and stress management is the key 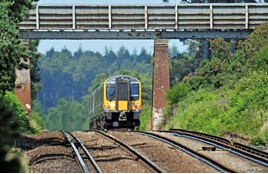 2018 was hot. Really hot. May was the hottest and sunniest on record in the UK, and June hasn’t exactly been chilly. Each year as we head into summer, the relentless heat stretches the limits of passengers, staff and trains.

And one element of the railway system above all others is acutely affected by the high temperatures… the rails themselves.

As any material heats up, it expands. For a standard 60ft length of rail (that’s 18.288 metres in new money), the difference in temperature between night and day can result in up to 10mm of linear expansion. This might not sound like much, but over a kilometre this can mean that rails grow in length by as much as half a metre.

In the past (and indeed on many stretches of today’s railway), this expansion was accommodated by maintaining gaps between the rail joints. These expansion gaps close in summer and open up again in winter.

The trouble is: rail joints (specifically the bolt holes used to fasten them) are a maintenance nightmare. A 1km stretch of single track would have had well over 100 of them, and under even moderate traffic these joints have a habit of disintegrating over time. On more than one occasion, this has had tragic consequences - as recently as 1983, a derailment over a star-cracked bolt hole in Elgin killed one passenger and injured 12.

Following the Hither Green disaster in 1967, British Rail accelerated its rollout of continuous welded rail (CWR) to reduce the number of bolted joints on the railway. By stitching rails together, rail strings many kilometres in length are created. Fastenings between rails and sleepers ensure that CWR doesn’t expand freely in the heat, resulting in a compressive force being applied to keep the rail (that wants to get longer) at its original length.

However, this exacerbates another problem.

To explain it, let’s do a little experiment. Pick up the nearest bit of paper, hold it in your hands, and pull. Paper is nice and strong in tension, and your piece will hold its shape well.

Now, still holding each end of the paper, push your hands together. Unless you’ve been avoiding your greens, the paper will deform with the lightest application of compressive force.

This is precisely the challenge railway engineers face with our rails. These are incredibly slender beams of steel, and while being very strong in tension, they offer very little structural resistance in compression. The problem of buckling rails can also have an impact on jointed track, but CWR’s length and resulting expansion means that particular attention is required.

For starters, it is very important to maintain the track and its supporting structures to minimise this risk.

A specific profile of ballast (or ‘shoulder’) either side of the track ensures that there is plenty of extra weight to hold sleepers in place as thermal forces increase. Concrete sleepers provide further weight, and are preferable to lighter steel or timber sleepers in high-risk areas.

Complex trackwork such as switches and crossings act as weak points, and so these must be strengthened or isolated from thermal forces using a special expansion joint, known as an adjustment switch (or a ‘breather’ for the old-fashioned among us).

However, to properly manage the risk of a track buckle, we must apply our own longitudinal stress into the rails to counteract those resulting from thermal expansion.

By cutting out a calculated length, pulling each of the cut ends together and then welding them into one length again, we apply a tensile force in the rail (ie: we’re pulling the piece of paper). As the rail heats up during summer, the sum of the thermal compressive forces and applied tensile forces gets closer to zero, at which point the ‘stress-free temperature’ is reached (normally 27°C, as rails would snap in winter much above this figure). The process of applying this tensile stress is imaginatively called ‘stressing’.

The critical rail temperature (CRT) is this stress-free temperature plus an allowance for track condition, weak spots and other issues, giving a temperature threshold that requires action to be taken if reached. In fact (on Network Rail infrastructure at least), there are three thresholds for action: CRT(W) requires constant monitoring by a watchperson while CRT(30/60) and CRT(20) both result in the application of a temporary speed restriction.

A well-maintained section of railway will have a high CRT(W) - typically 59°C - whereas the value for a knackered old bit of track with timber sleepers and no ballast shoulders will be at or close to the stress-free temperature. The CRT is further reduced during adjacent construction works or following track renewals.

This cascade of rail temperature thresholds is called CRT management and (again thanks to some high-profile derailments) has become more developed and indeed more scientific over the past 20 years or so.

Network Rail continues to develop its CRT management processes, and improve engineers’ and other relevant operatives’ understanding of the importance of minimising the risk of buckles.

Maintainers ensure that the tracks in their patch are suitably stressed and records are up-to-date (which is more easily said than done). Design engineers must propose suitable stressing arrangements as part of their proposals, and (ultimately) the renewal of the railway aims to remove areas or materials that give a low CRT.

Despite all this, it remains an uphill struggle. A changing climate means that we have to contend with both increased average temperatures and greater extremes of temperature, resulting in the CRT thresholds being met more regularly. The constant drive for cost efficiencies puts pressure on maintenance teams, and great tracts of the rail network remain where dubious stressing records exist.

There is room for optimism, though. The slow trundle of practical innovation is starting to bear down on remote monitoring for track infrastructure, and this includes track temperature recording.

Traditionally, there would be an exposed short panel of track in the local depot with a temperature dial on it. When the reading on this dial matched the CRT thresholds for track that the depot staff were responsible for, action would be taken.

Clearly this is not the most efficient use of resources. Increasingly, trackside temperature monitoring as well as rail-mounted remote temperature sensors are being used, which means more accurate site-specific readings and a better use of valuable staff time. Improved forecasting also helps, as this allows suitable mobilisation of maintenance staff and watchpeople in advance of extreme weather events.

The automation of these processes, both by improving the specificity of temperature measurements and through centralised record keeping, can significantly improve Network Rail’s response to hot weather. But there is undoubtedly room for further research and development.

So the next time your train is delayed due to hot weather, and you and your fellow passengers quite justifiably start getting fidgety, understand that it isn’t for trivial reasons…

Whether it is those clad in orange with their boots on the ballast, the Met Office forecaster in Exeter predicting the next heatwave, or the electrical engineer in the Birmingham Centre for Railway Research and Education developing a new system of remote temperature monitoring and analysis, there are a lot of people trying to keep you moving.