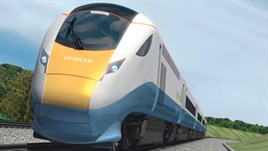 The deal will see Agility - a consortium of Hitachi and John Laing - supply trains for 50 daily Great Western diagrams and 28 daily East Coast diagrams, in return for payments from those operators of £4.5bn over 271⁄2 years. The trains will be a mix of five-car and nine-car units in electric and bi-mode configurations.

The Department for Transport told RAIL that each electric vehicle would cost £2.43 million and each bi-mode (electric with diesel engine) would cost £2.93m. With Agility planning to build 249 electric coaches and 347 bi-mode coaches (according to DfT figures) that gives build costs of £605.4m and £981.7m respectively.

Train operators privately fear that IEP will substantially increase their rolling stock costs, but Secretary of State for Transport Justine Greening dismissed this fear, saying she did not think that it was necessarily true.

With Agility set to receive £4.5bn over the life of the contract for supplying 502 26-metre vehicles every weekday (from the fleet of 596), the rate per vehicle is around £890 per day.

For this, Agility must fund the fleet’s construction, maintenance and cleaning, together with its maintenance depots at North Pole (London), Stoke Gifford (Bristol) and Swansea Maliphant for GW, and Bounds Green (London) and Doncaster for EC.

Talking exclusively to RAIL, Greening said she was convinced that IEP offered value for money, and that the contract drawn up by DfT (Agility will be paid only when it supplies trains) would really make a difference. She said that “you could not say that costs would rise”, adding that more passengers should bring more revenue.

To support its case, DfT said that a nine-car IEP would provide 188 more seats than a nine-car Class 390 Pendolino. For the latter to provide the same number of seats, it would need to be formed of 11 cars.

Agility plans to build a new factory at Newton Aycliffe (County Durham), only a few miles from British Rail’s former wagon works at Shildon that closed in 1984. The factory will be built over two years, and be fully operational in 2015. It will receive IEP bodyshells constructed in Japan to fit out into completed trains. Agility said the factory would employ up to 730 people.

Agility Trains Chief Executive Alistair Dormer said: “We’re absolutely delighted to have achieved contract award on the IEP. It is among the biggest contracts ever closed in the UK rail industry, and will mean a step-change in reliability, capacity and comfort to British passengers.”

At train operator First Great Western, Managing Director Mark Hopwood said: “The new trains being built under the Intercity Express Programme will replace many of our iconic High Speed Trains that revolutionised rail travel in the 1970s with their 125mph top speed. I’m convinced IEP will deliver another revolution in passenger travel, with the prospect of quicker journeys from 2017.”

The next GW franchise is required to use IEP, although government is leaving the precise deployment to the companies now bidding to run the franchise (See Network News, pages 8-9).

However, it is likely that the electric version will run services from London to Bristol, Oxford, Cardiff and Swansea, with bi-mode trains running to places such as Worcester, Hereford, Gloucester and Cheltenham.

Other options include trains for GW’s London-Penzance services, as well as London-Cambridge-Kings Lynn and London-Milton Keynes-Northampton. These options were originally in IEP’s core deal when Agility became preferred bidder in 2009. The changes account for IEP now being for 596 coaches rather than 2009’s 1,400 vehicles.

The deal was generally welcomed, with support coming from the Institute of Directors, Unite union, Passenger Focus, ATOC and Welsh Secretary Cheryl Gillan. However, Unite said credit for the deal should go to the previous Labour government, while ATOC said the DfT’s procurement had been contentious, and called for train operators to have a bigger role in rolling stock procurement.