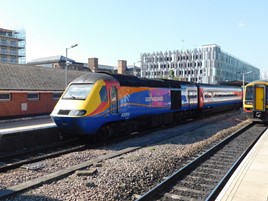 Government has asked East Midlands Trains to undertake a procurement process on its behalf, regarding modification of High Speed Trains to meet the Passengers with Reduced Mobility (PRM) accessibility standards deadline of January 1 2020.

However, this is not expected to include automatic doors, and EMT understands that the Department for Transport continues to expect the next East Midlands franchise to use new trains.

The request was revealed in a letter from EMT Managing Director Jake Kelly to Lilian Greenwood MP, dated March 14.

In the letter, Kelly highlights that the current EMT deal is expected to end in August with a new franchise taking over. He states that the DfT “has asked us to undertake on their behalf a tender process and commence a programme which works towards addressing some of the HST fleets’ PRM non-compliance”.

He added that the enhancements would likely include making them more accessible for passengers, although he doesn’t say how.

Kelly also wrote that as part of the tender process, EMT has included an option to install sewage tanks (controlled emission toilets). But the work does not include the sliding doors because “these are not a specific requirement of PRM”. He said EMT expects to receive bids for the tender soon.

Work is needed on the HSTs following a change in heart from Government over electrification of the Midland Main Line north of Kettering and Corby.

In July 2017, Secretary of State for Transport Chris Grayling confirmed that bi-mode trains would be ordered and that wires would not be erected. He declared that these new trains must be introduced from April 30 2022. This decision created a shortfall in stock for EMT because the HSTs did not meet the PRM regulations.