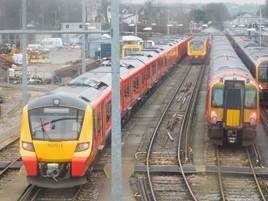 Almost 4,000 currently serviceable vehicles will be withdrawn when their lease ends within the next three years.

The Rail Delivery Group’s sixth annual Long Term Passenger Rolling Stock Strategy, published on March 22, indicates that a number of fleets will be withdrawn as new trains are delivered.

Some 2,400 vehicles due to be withdrawn are more than 30 years old. The future of these remains uncertain, although RDG predicts that some will be scrapped.

The report states that the number of new vehicles committed for delivery is 7,187. This equates to more than 50% of the current in-service fleet of 14,025 (of which 7,377 were built since privatisation). These deals are worth £13 billion, and the number of vehicles in traffic as a result of these orders will rise by 6% next year and by 5%-13% by 2024.

RDG says the long-term outlook remains unchanged from previous studies, with an increase in the national fleet of between 40% (5,500 vehicles) and 85% (12,000 vehicles) forecast over the next 30 years. The mix of traction is uncertain, but by 2047 the number of vehicles in traffic could be as high as 25,969.