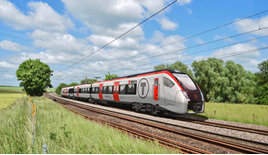 £5 billion will be invested in the new 15-year Wales & Borders franchise, with all current trains replaced, and 95% of journeys made on new-build stock.

A South Wales Metro has been created as part of the deal, which was confirmed today following a ten-day standstill period.

KeolisAmey will operate the franchise in partnership with Transport for Wales (TfW). It will be run under the TfW brand.

£800 million will be spent on trains, boosting capacity by 65%, with the current fleet entirely replaced by 2023. Half of the new trains will be built in Wales.

All 247 stations will be modernised in a £194m scheme that includes new-build stations at Gabalfa, Crwys Road, Loudoun Square and The Flourish. There will be an extra 600 staff and 450 apprenticeships. Smart ticketing will be introduced, while there are plans for fares reductions.

The Welsh Assembly said increased capacity will start from December on the Valleys and new services will run between Chester and Liverpool.

First Minister Carwyn Jones said: “This is an important moment for transport in Wales and begins a new chapter for rail services in this country.

“The way we shaped this procurement was different. We put passengers’ priorities at the centre of our thinking and threw out a challenge to all of the bidders to address the concerns they had about seat capacity, journey times and service frequency. People said they wanted affordable fares and newer, cleaner trains and we have worked hard to ensure this is reflected in what we are launching today.

“This is a chance not simply to build a modern, forward looking transport system, but to use it as an important tool to shape the life of the nation around us. This is a landmark moment in the future development of Wales.”

Ken Skates, Cabinet Secretary for Economy and Infrastructure said: “This is the first time a rail service has been procured and awarded in Wales, for Wales. It follows over four years of intense work to develop a bespoke, innovative approach and responds to the lessons learned from rail franchising and infrastructure delivery across the UK in recent years.

“Too often in our history, we’ve talked about the ownership models for rail, without also thinking through clearly enough what we wanted to do with the network itself. We now have a once in a generation opportunity here to correct this.

“I will be using the new cross-government delivery board I have set up through the new Economic Action Plan to work with Transport for Wales, ministerial colleagues across government and partners such as the Development Bank of Wales and the Valleys Taskforce to ensure we maximise the economic development opportunity we have in front of us.”

James Price, Chief Executive of Transport for Wales said: “This is the beginning of an exciting journey of transformation that will dramatically improve rail services throughout Wales and its borders and we’ve put our customers’ needs at the heart of this transformation.

“This is more than a significant investment in rail services, it’s also an investment in the future prosperity of Wales.  The people and communities of Wales will be better connected by new and improved rail services, opening up a wealth of employment, leisure and other opportunities.”

Rail Minister Jo Johnson said: “This is a historic day for passengers because it puts more control of regional train services into local hands and benefits rail users on both sides of the border.

“We have worked closely with the Welsh Government to secure the best deal and the new franchise will bring extra services and record investment. We are also investing £125 million to establish a new metro service connecting towns and villages across South Wales.”

Alistair Gordon, Chief Executive of Keolis UK, said: “For too long the railways in Wales have suffered from under investment and, while the changes we need to make will take time, we are creating a platform for future economic growth and prosperity that will benefit all of Wales now and for generations to come.

“In five years’ time, the railway will be unrecognisable from what it is today thanks to the vision of the Welsh Government. We can’t wait to get started.”

Amey Chief Executive Andy Milner added: “This is a great opportunity for us to use our joint capabilities to deliver a first-rate service for Wales and its communities. As well as creating new jobs and apprenticeship opportunities, we will be focused on upgrading the existing infrastructure and introducing new trains to significantly improve the passenger experience.

“We are looking forward to working with Transport for Wales in a partnership which will see the full replacement of all trains, and major upgrades.

“We are also looking forward to working with the very proud and dedicated men and women running the railway in Wales today, who will join us on this exciting journey.”