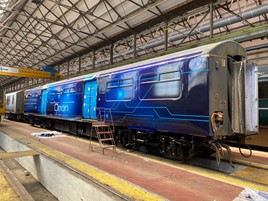 Conversion of the first trains that will enable Orion High Speed Logistics to start serving London Liverpool Street in the first quarter of next year is under way.

RAIL exclusively revealed last year that Orion would run three trains per day between London Gateway and Liverpool Street (RAIL 889). A delay owing to the non-availability of trains has now been resolved.

Created in 2018, Orion is part of the Rail Operations Group (UK) Ltd business. Orion spokeswoman Milda Gircyte told RAIL that after the Gateway-Liverpool Street service, other routes being considered include London-Scotland’s Central Belt, London-Midlands and the North, and a London-South West route.

As for paths and access to the network, Gircyte told RAIL: “Even with the pre-COVID network conditions, we have been able to secure suitable timings based on the departure and arrival preferences of our potential customers.

“We’ve been focusing on our core proposition for now, as we believe it’s essential to get the logistics train operations right first. However, robotics integration is still in our long-term roadmap.”

Initially, Orion will use four-car Class 319 electric multiple units and Class 769 FLEX bi-modes leased from Porterbrook. Three have so far been leased with more to follow.