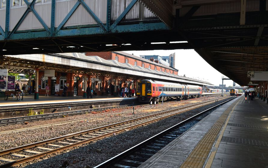 Midlands Connect confirmed that it is working on an £18 million proposal that would raise line speeds to 75mph from the present 50-75mph and shave up to ten minutes off the current journey time of 55 minutes.

Meanwhile, improvements to signalling and at level crossings would enable the current service frequency to be doubled, to two trains per hour.

According to the sub-national transport body, a range of options for the rail corridor have been examined through an early feasibility study in 2018 and ongoing technical work by Midlands Connect (MC), Steer and Network Rail.

Options that have been rejected as delivering little or no improvement include the introduction of Class 170s (instead of the current ‘158s’).

At the other end of the scale, increasing line speeds to 100mph was quickly discarded owing to the “astronomical cost”.

Replacement of the flat crossing with the East Coast Main Line at Newark, which represents the most significant constraint on capacity on the route (RAIL 923), has also been deemed to be too expensive.

MC Senior Rail Programme Manager Tawhida Yaacoub said the current proposal gave a ‘medium’ benefit:cost ratio of 1.7, but conceded that the business case for doubling services between the two East Midlands cities would remain “weak” until the arrival of HS2.

The next step will be to develop a Strategic Outline Business Plan, to submit to the Department for Transport to secure further funding. This outline plan will be informed by the results of an online consultation that ran in early 2022 to gauge businesses’ views on how the scheme would increase productivity and access to skilled labour.

“The cost of the infrastructure we are proposing is minimal when compared to the £25m cost of a new station,” added Yaacoub.