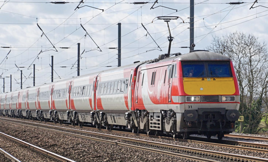 East Coast Main Line Class 91, 91131, the final locomotive to be built at Crewe Works and a passenger speed record breaker, has been handed over for preservation - as promised almost a quarter of a century ago.

After accumulating around eight million miles over a 30-year career, 91131 was due to be moved by road to the Bo’ness & Kinneil Railway (BKR) on January 9, having been parked up in Doncaster Belmont Yard since the end of 2021.

While it will never run again, it will have pride of place in the Scottish museum, as part of a deal whereby North British Class 84, 84001, will be handed back to the National Railway Museum.

91131 is famous for achieving 154mph on a special passenger run in 1995. It was officially saved for the nation at a meeting of the now defunct Railway Heritage Committee, way back on July 31 1998. RAIL played an active part in this decision.

“We are delighted to take 91131 into our care. It is a result of several months of negotiations,” said BKR Museum Director Becky Peacock. The museum she manages, which has 156 vehicles in its collection, beat Crewe Heritage Centre for the Class 91 because it is closer to where it ran (Bo’ness is 17 miles from Edinburgh).

The ‘91’ design, which hauled Mk 4 coaches and a Driving Trailer, was chosen ahead of the Brush prototype six-axle 89001 primarily because its four axles would inflict less track damage.

BR wanted to construct a further ten ‘91s’ (91032-41) for the West Coast Main Line, but the government of the day rejected the business case.

On June 2 1995, it achieved a UK passenger speed record of 154.1mph on Stoke Bank (south of Grantham), almost 57 years after Sir Nigel Gresley’s streamlined ‘A4’ 4468 Mallard had broken the world speed record for steam (the latter’s 126mph has never been beaten).

The current non-HS1 UK speed record is now 161.7mph, attributed to 91110 and a shortened IC225 train on September 17 1989, but this was only on a brief test run without passengers, and did not follow normal accreditation rules.

Recognition of 91131’s importance came with the 1996 Railway Heritage Act, which provided sweeping powers to safeguard valuable items that were in danger of being lost when they drifted into private ownership.