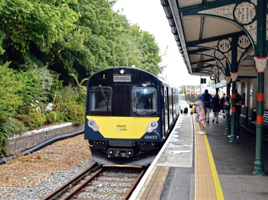 A decade after it was established by former Chiltern Railways Managing Director Adrian Shooter and US-based Railroad Development Corp (RRC), the company’s 70 employees - and the trains delivered to three UK operators – face an uncertain future.

“The Board and I have worked incredibly hard to secure new investment in recent months, and although we have been encouraged by the level of interest, time is now against us to allow potential investors to step in,” said Vivarail Managing Director Steve McBride.

The company is now working with customers and stakeholders to find a viable solution, but admits that without a rescue package administration is inevitable.

Founded in 2012 with ambitious plans to create new low-cost trains for regional traffic from 228 redundant London Underground ‘D78’ vehicles, Vivarail has been widely praised for its innovative and flexible ‘D-Train’ concept. However, it has struggled with supply issues and has failed to meet its delivery deadlines.

With opportunities limited in the UK, the company looked to North America, offering a ‘Pop Up Metro’ concept for underused railroad lines around major cities. Two US-specification ‘D-Train’ prototype DMUs were exported in 2021-22.

If the hoped-for rescue plan fails to materialise, there is concern that ongoing operation of the Class 230s and ‘484s’ could be affected by a lack of after-sales maintenance and spares support.

A South Western Railway spokesman told RAIL: “We are monitoring developments at Vivarail and, if they were to appoint administrators, would work closely with them to ensure the continued smooth running of our trains on the Island Line.”