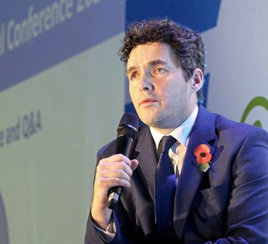 Newly appointed Rail and HS2 Minister Huw Merriman has pledged to focus on signing off on a growing backlog of projects, while making the case for continued investment despite a “challenging economic environment”.

Speaking publicly for the first time since his appointment on October 27, the former Transport Select Committee Chairman sought to reassure delegates at the Railway Industry Association’s annual conference that the Government remained committed to delivering on the Integrated Rail Plan.

As his speech came a week before the Autumn Statement on November 17 (see pages 6-7), Merriman directly addressed fears that elements of the £96 billion IRP (published exactly 12 months ago) and other parts of the rail enhancement portfolio might be ditched in Chancellor Jeremy Hunt’s bid to find more than £35bn worth of spending cuts.

He conceded that making the case for fresh capital investment had been made more difficult by limits to government borrowing, but that schemes that “are affordable, which serve post-pandemic travel patterns, and which improve passenger experience will get the green light”.

As for other matters currently sat in Merriman’s in-tray, he claimed that the new transport ministerial team had “changed the tone” on the long-running industrial dispute with trade unions by adopting a less confrontational approach than former Secretary of State for Transport Grant Shapps.

Although letters have been sent to the leaders of the main rail unions, inviting them to introductory meetings with new Transport Secretary Mark Harper, Merriman admitted that there were no plans to directly participate in negotiations, which are being led on behalf of the industry by Network Rail and the Rail Delivery Group.

Merriman closed by asking for patience on the future direction of rail reform, following confirmation in October that legislation for the new Great British Railways public body will be delayed.