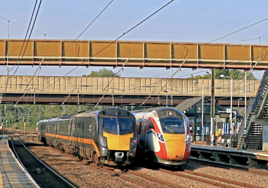 That’s the message from Toufic Machnouk, Director, Industry Partnership for Digital Railway at Network Rail. Backing him up, NR Chairman Sir Peter Hendy CBE is calling on the industry for “everyone to share a bit of optimism”.

Speaking at the Digital Signalling: East Coast and Beyond event, organised by Network Rail and attended by 563 people, Machnouk said that whereas building the European Train Control System (ETCS) into a new railway such as HS2 is “pretty straightforward”, for NR the challenge is to “transition a complex and fragmented operation that’s been this way for decades”.

He asked: “Frankly, is the challenge worth it?” And he replied that the answer is ‘yes’, adding: “Digital signalling achieves far more for less. It’s almost half the unit cost and half the access requirements, so how can we afford not to?”

Drawing on his experience at Transport for London, where digital signalling is being rolled out under the Four Lines Modernisation, Hendy said cost benefits are crucial. He cited the Victoria Line’s digital signalling, where “we run more trains, more reliably than anybody had imagined during the investment case”.

Accepting that ECTS Level 2 on a mixed-use railway is different from a metro-style operation, Hendy added: “The overall point is delivering more services, more reliably, by using modern technology on an existing railway.”