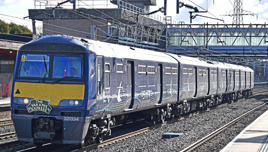 A self-powered bogie able to move up to 20 containers, technology to instantly pinpoint cable theft, and decarbonisation schemes are among the winners of the latest ‘First of a Kind’ government grants.

The 24 selected projects will together receive more than £4 million in development money from the Department for Transport, under an annual funding competition run in partnership with the Government’s Innovate UK.

Winner of the biggest single grant (£400,000) is ‘Freight Skate’. Led by TDI (Europe) in partnership with others, including GB Railfreight, this aims to produce “a self-powered semi-autonomous bogie which will improve operating flexibility”.

Operated by a single person, ‘Freight Skate’ will be able to move 20 containers and is intended for use within freight terminals.

Also winning one of the largest grants (£396,467) is Varamis Rail, which is using a repurposed electric multiple unit and working with DHL and FedEx to offer Anglo-Scottish parcels traffic (RAIL 968).

Schemes to help carbon emissions reductions are well represented in the latest ‘First of a Kind’ funding round. They include a Siemens-led project to produce a converter to utilise renewable energy for traction power. A prototype is to be tested on the East Coast Main Line.