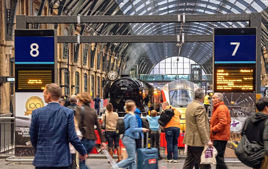 The first day, reserved for media and guests, coincided with the exact anniversary of the opening of the original Great Northern Railway station. It was followed by two days of public display and access.

Network Rail Chairman Sir Peter Hendy CBE highlighted the unique public attraction of “the most popular locomotive in the world”, which was positioned throughout at the buffer stops on Platform 8.

“We can’t get in the way of the normal railway, but actually our own people like doing this,” he told RAIL. “A lot of the 170th anniversary stuff here has been done by the station staff. What could you not like about this?”

“I think the whole thing has come a long way,” added Hendy. “Working on the railways is not just a job, it’s a vocation. And people do like it - and the fact that it has great history, iconic buildings and iconic trains is terrific.”

This isn’t the first time that Flying Scotsman has been used to promote the contemporary railway. Its London North Eastern Railway parentage made it especially useful in publicity terms to the 21st century train operating company of the same name.