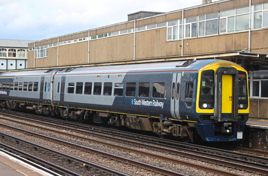 South Western Railway intends to replace its Class 158 and ‘159’ diesel multiple unit (DMU) fleets by 2030 with an “innovative self-power solution” such as battery (which could include lineside rapid recharging points) or hydrogen.

Outlining plans to achieve ‘net zero’ by 2040, SWR observed that its current DMU fleet, comprising 110 vehicles, is 30 years old and will need “significant investment” in the next five to ten years.

The operator said that reaching net zero carbon emissions by 2040 is dependent on a range of external factors, including: government funding; policy commitments to decarbonise the National Grid and electrify the rail network; investment and innovation in rolling stock technology; and action from the wider value chain.

The Department for Transport has backed SWR, in collaboration with Network Rail and other key stakeholders, to deliver the UK rail industry’s first robust, transparent and cost-effective roadmap to net zero.

Rail Minister Kevin Foster said: “SWR’s commitment to deliver net zero carbon emissions by 2040 is a bold and ambitious target which will make our railways even greener.”

SWR said it can lead the way for decarbonisation of the entire UK rail network, soon to be overseen by the new Great British Railways, building a modern, innovative and sustainable railway fit for the future that can attract customers back after the pandemic.

“SWR’s challenging targets in its 35-page Journey to a net zero future document have been independently assessed and will be audited by climate experts at the Science Based Targets initiative (SBTi), an internationally recognised authority which helps companies to set emission reduction targets in line with latest climate science.

The plan is designed according to the latest analysis of SWR’s climate impact. Over half (52%) of emissions are from supply chains, 45% from running train services, and 3% from buildings such as depots and stations.

“It is really encouraging to see the leadership and action being committed to by SWR in its ambitious decarbonisation roadmap” said Rail Safety and Standards Board Sustainable Development Director George Davies.

“It will contribute to best practice for the rest of the industry to learn from and apply elsewhere.”