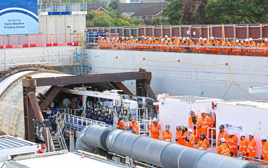 Named Sushila, after pupils nominated local teacher Sushila Hirani, it is the fourth of ten TBMs to be launched so far on the route of HS2 Phase 1 between London and the West Midlands.

Later this year, a second TBM, named after 18th century astronomer Caroline Herschel, will also be launched from West Ruislip to dig parallel to Sushila on the second of the twin-bore tunnels towards central London.

Each measuring 140 metres in length, the pair will bore for the next 22 months to a site at Greenpark Way in Greenford, where they will be dismantled.

Together, the quartet of TBMs will build some 8.4 miles of twin-bored tunnels between West Ruislip and the new high-speed ‘superhub’ station at Old Oak Common.

“This launch is a landmark moment in the delivery of HS2,” said Rail Minister Kevin Foster.

“Already well under way, HS2 is set to revolutionise journeys for communities throughout the country, boost local economies and, at its peak, support more than 34,000 jobs.”