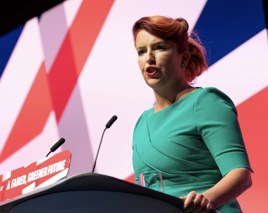 At the party’s annual conference in Liverpool, Shadow Transport Secretary Louise Haigh used her keynote address to vow: “We can only build a fairer, greener future by taking power from failing private operators and putting it back in the hands of the public.”

Haigh, who took over the transport brief from Jim McMahon earlier this year, singled out Avanti West Coast for criticism. The operator has withdrawn numerous services, and the remaining trains have suffered from delays and cancellations. Meanwhile, ticket bookings have been left closed until just a few days before travel.

Haigh also criticised the Conservative government for giving Avanti “£4 million in performance bonuses”, adding: “You couldn’t make this up. Instead of holding those responsible to account for this fiasco, the Tories played their tired, old tune. They blamed the workers who keep our rail going.

Rail unions ASLEF and TSSA welcomed Haigh’s commitment. ASLEF President Dave Calfe said: “It means that, under the next Labour government, the railway will be regarded as a proper public service - not an opportunity for the Tory Party’s mates to rip off passengers, drive up fares, treat their staff poorly, and plunder the public purse for private profit - much of it, ironically, shipped abroad to keep fares down in Europe.”

But Rail Partners Chief Executive Andy Bagnall described the pledge as “not unexpected but still disappointing”, saying it would “end the positive contribution of private sector operators to the railway”.