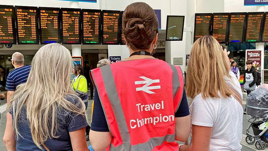 Passenger numbers on the West Midlands public transport network reached record levels during the 12 days of the Birmingham 2022 Commonwealth Games.

West Midlands Railway has estimated that around two million journeys were made on rail in the West Midlands during the Games, with records broken at a number of individual stations close to the venues.

Birmingham’s New Street station recorded its second ever busiest day on August 6, with 255,390 people using its platforms - it was only beaten by a Black Friday shopping spree in 2019.

Records also tumbled at the newly redeveloped Perry Barr station, with more than 25,000 passengers during the Games.

And unprecedented numbers were recorded at University station in south Birmingham. The station, which had additional capacity with wider platforms, was used by more than 150,000 passengers during the Games, including 31,000 on Monday August 1 alone.

Throughout the Games, passengers were helped by more than 300 railway volunteers, dressed in pink as travel champions. They welcomed and directed visitors from around the world, many of whom had never been to Birmingham before.