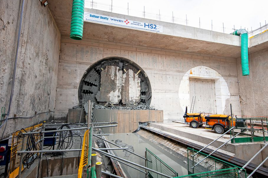 There is now daylight coming through the first structure on 64 miles of the London-Birmingham route at Long Itchington Wood.

Dorothy, which requires a staff of 400 to operate it, reuses material excavated from the tunnel to build a soil ‘roof’ around its entrance. The rest of the excavated material is transported by a conveyor out of each site, rather than going by road.