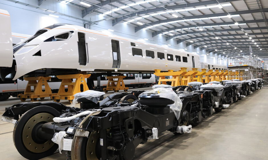 The operator described it as a major milestone in the delivery of an order for ten seven-car electric multiple units (Class 807) and 13 five-car bi-mode trains (Class 805).

Due to enter service in 2023, the Class 807s will operate between London, the West Midlands and Liverpool. Meanwhile, the diesel-electric ‘805s’ will be deployed on Avanti’s London-North Wales route.

The first train to begin testing is an ‘805’, which has now been coupled together so that all basic functionality of the train (from brakes to engines and doors to toilets) can be put through its paces ahead of dynamic testing later this year, when the train will move under its own power.