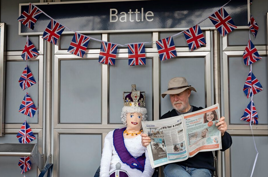 Meanwhile, some trains serving the capital - including those from Greater Anglia and Great Western Railway - carried the official Platinum Jubilee emblem.

In Scotland, a tea party was hosted at Glasgow Central, while Network Rail Construction Manager Ian Simms played the bagpipes from the top of the Forth Rail Bridge (pictured).

His rendition of Highland Cathedral marked the exact date and time that the Queen’s coronation began at Westminster Abbey - at 1115 on June 2 1953.

Elsewhere, Chiltern Railways held mini-Jubilee-style stalls at four of its stations, while Northern installed ‘Thank you’ trees at Manchester Victoria and Shipley, for passengers and staff to leave messages of thanks and hope on the branches.

Southeastern decorated many of its stations with bunting, flags, and even a life-sized knitted queen (pictured), which made an appearance at Battle, Robertsbridge and Tunbridge Wells.

Festivities were also held by South Western Railway at Windsor & Eton Riverside, where members of the operator’s executive team shared a Jubilee celebration lunch with colleagues and community representatives.

Royal-themed events also took place at museums - including Locomotion Shildon, which looked back at seven decades of rail, and the National Railway Museum, which is running a Royals on Rails exhibition until early September