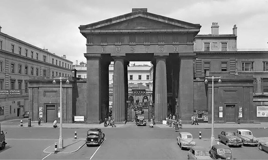 Network Rail was awarded a grant by the Railway Heritage Trust to create a modern reminder of the Doric Arch, which was controversially demolished to make way for the rebuilding of Euston in 1961.

Built in 1838, the neo-classical arch dominated the entrance to the world’s first inter-city terminus. But when British Rail embarked on electrification of the West Coast Main Line in the late 1950s, the arch was deemed to be standing right in the middle of where a new modernist station was due to be built.