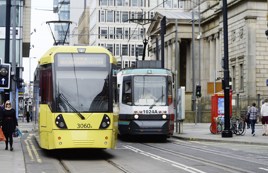 Speaking at the launch of train drivers’ union ASLEF’s Invest in Rail campaign on May 8, Burnham said the reduced timetable introduced on Northern routes was a “self-serving act” and accused train operating company and Department for Transport bosses of “letting down” Manchester.

He also said the Ordsall Chord, which links Manchester’s Piccadilly and Oxford Road terminals with Victoria, “stands today as a monument to railway planning failure”.

The line was opened in 2017 but has had little effect in relieving congestion - because no extra capacity has been built at the stations.

Burnham added: “They’ve never come up with a solution to the bottleneck that is Manchester city centre. They didn’t follow through. They didn’t provide the investment for the infrastructure that could support a timetable that people deserve. That’s why the industry has failed.”

Burnham told the audience of train drivers: “They’re running it in their own interests, it seems to me. ‘Oh, we’ll protect ourselves and our reputation.’ They’re saving face before putting on services for the public. And there’s no end in sight to this reduced timetable.”