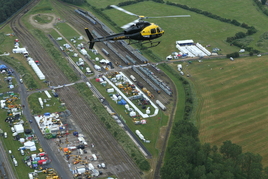 Subject to wider connections and timings, this dedicated passenger service will enable easy travel by train directly into Rail Live via the West Coast Main Line - from Manchester, Preston and further afield in the north, and from Milton Keynes, Watford Junction and London Euston in the south.

In a bold initiative between RAIL, Tyseley’s Vintage Trains and Network Rail, our bespoke charter even includes three Pullman cars. Supplementary fares will be £20 return from New Street and £10 return from Worcester, with fares bookable in advance online (see panel) or on-the-day by credit/debit card.

Due to pick up at Worcester, the daily trains will run (via the Lickey Incline) into the new private Rail Live platform on both days. They are provisionally planned to arrive at Long Marston at around 1145, with return departures from the show for New Street each day at around 1645, arriving back in Birmingham at 1815. All times will be confirmed soon, subject to final main line pathing/New Street platform arrangements with Network Rail.

The locomotive-hauled trains will be top-and-tailed to simplify operations throughout and to eliminate ‘run-rounds’. A Vintage Trains Class 20 will lead the train from New Street/Worcester and into Long Marston via the two-mile branch, which diverges from the Oxford-Worcester main line at Honeybourne.

To provide greater power for climbing the 1-in-37 Lickey Incline (Britain’s steepest main line gradient) over the two miles from Bromsgrove to Blackwell on the return journey, the train will be hauled back to Tyseley via Worcester/New Street by Class 47, 47773 The Queen Mother.

After all passengers have disembarked at Rail Live, the train will be stabled as an exhibit within Rail Live, with opportunities for visitors to talk to VT staff and visit the Pullman cars.

“This is the only major exhibition to bring Britain’s entire rail industry together and we are very keen to be a part of it,” said Vintage Trains Chairman Michael Whitehouse.

“It struck me that a great way for us to be involved would be to use our national community TOC status to actually bring visitors into Rail Live by train. RAIL Managing Editor Nigel Harris and I have been friends since the 1980s and we quickly reached broad agreement - and we are all delighted. Do come and see us at the show, and learn about VT as a community TOC,and hear about what we can do for, and in, the rail industry!

“We’ll be serving teas and coffees on the way from New Street to Long Marston, and our catering staff are keen to serve bacon rolls too, to set visitors up for their day at this very large show.

“It’s roughly a 90-minute journey from New Street to Long Marston, so there will be plenty of time - including runs in both directions over the Lickey Incline, possibly in a Pullman for some passengers. The journey to Rail Live will be an event in itself!”

Rail Live visitors can also reach the show/travel home directly by rail from London Paddington, Swindon, Bristol and the South West, subject to timings and connections.

Travel by Great Western Railway services to Honeybourne, where you can change to Rail Live’s dedicated battery-powered shuttle service aboard a Class 168, courtesy of Chiltern Trains.

This will take you over the final two miles to disembark at the event’s dedicated private platform, which is a short walk from Rail Live’s main entrance and registration.