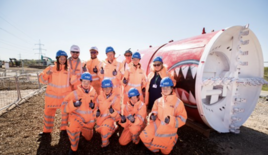 The name was chosen by students from the nearby The Misbourne school. Pupils from Year 8 visited the site in late April to see the arrival of the 19-tonne TBM, which they suggested naming after Her Majesty the Queen.

At 8.9 metres long, the TBM is far smaller than the 170-metre machines (named Florence and Cecilia) that are currently excavating the ten-mile twin-bore Chiltern Tunnel.

Due to be launched in the next few weeks, Lizzie will dig a 300-metre drainage tunnel close to the north portal of the Chiltern Tunnel at South Heath.

A second identical machine, to be named Marsha after Afro-American gay and transgender rights activist Marsha P Johnson, will be launched at the end of May to complete the remaining 450 metres of the drainage tunnel.