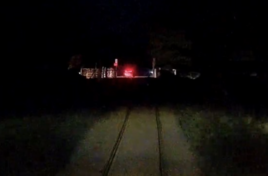 His comments come as RAIB published its report into a very near-miss - by just one second - involving two cars 16 months ago.

The report also reveals a ‘Catch-22’-type situation for the past 20 years, whereby the crossing has not been closed or upgraded due to a combination of local objections and proposed upgrades being too expensive or not meeting standards.

Coltishall Lane crossing in Norfolk is a minor public road over the single-track Sheringham branch. Average traffic is four vehicles a day, and the crossing is protected by gates that road users must open after telephoning the signaller for permission

It was dark at 1721 on January 21 2021, when the 1649 Sheringham-Norwich approached the non-lit crossing at the 75mph line speed as two cars passed over the crossing.

The second car cleared the crossing just one second before the three-car Class 755 bi-mode unit, by now travelling at 65mph with an emergency brake application under way, arrived at the crossing.

RAIB found that a higher-than-usual number of cars were using the crossing, due to an accident at 1645 that had closed the B1150, a little over a mile away. No temporary road diversions were in place.

Although none of the car drivers were traced, RAIB concluded that they lacked familiarity with user-worked crossings.

“At present the greatest scope for safety improvement exists at user-worked crossings, whether on private of public roads,” said Hall.

“Over more than 20 years, the railway was aware that the safety arrangements at this crossing should be improved, but it seems that bringing about such change was too difficult.”