Wareham to Swanage service postponed to 2023 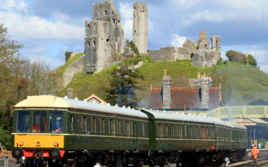 A regular service connecting the Swanage Railway with South Western Railway trains has been postponed again.

Plans to run daily trains linking the Dorset seaside resort with Wareham on the South Western Main Line, via Worgret Junction, have been repeatedly delayed over the last decade.

A 60-day trial ran during 2017 with public sector financial support - using hired rolling stock, as the Swanage Railway’s own vehicle restoration ran behind schedule. Now the three-car Class 117 and Class 121 ‘Bubble Car’ are ready for use.

Swanage Railway Chairman Gavin Johns said: “We can only run trains to Wareham when the conditions are commercially viable.

“The Swanage Railway’s business is still recovering from COVID. Trading conditions are very unpredictable because they are being heavily affected by significant price rises being borne by our customers and our business, such as the increased cost of coal.

“The extensive work required to put in an application to the Office of Rail and Road for operating trains to Wareham has taken longer than expected. It has probably been the most challenging project in the 45-year history of the Swanage Railway.”

The railway intends to run the services during summer 2023 instead, and will now concentrate on its normal heritage trains.

The ten-mile route via Corfe Castle was closed by British Rail in 1972, with most of the track removed the same year. During 2019, the railway carried 200,000 passengers. The railway claims to boost the local economy by £15 million a year.

Plans to take passengers to Redmire

A fundraising appeal has been launched to restore passenger services on the westernmost section of the Wensleydale Railway to Redmire.