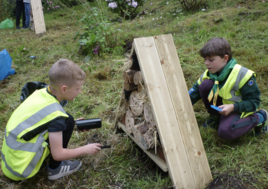 Publication of Community Rail & Biodiversity comes in advance of the environment plan expected to be produced during 2022, as part of a new 30-year strategy for the industry. The report has been produced in conjunction with the Rail Delivery Group

The Community Rail Network says that of the groups adopting 1,200 stations across the country, the vast majority are “involved in some form of biodiversity/gardening/wildlife activity”.

CRN says it has directly funded more than 170 biodiversity, gardening or wildlife-related projects in England alone since 2016-17.

Chief Executive Jools Townsend said: “Biodiversity is fundamental to our well-being and quality of life, and we face a worsening biodiversity crisis that communities can play a crucial role in addressing.

“Responding to this, around Britain Community Rail Partnerships and station groups, working with rail industry partners, are creating gardens, spaces and habitats to nurture wildlife, building biodiversity gain into their work and supporting local conservation efforts.

“These activities also bring social value, bringing people together and improving local resilience. They raise awareness of the importance of the natural environment and connect people with the diversity of life on their doorstep, using local railways and stations - our green transport network - as a focal point.”