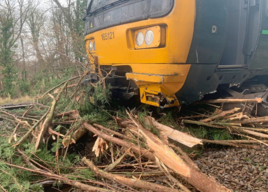 Secretary of State for Transport Grant Shapps has expressed concern over the scale of cancelled trains during recent storms, saying he fears train companies were being “overly cautious”.

His views were reported by the Daily Telegraph on February 21, while the last of three named storms inside a week was raging and after what had been described as “the storm of the decade” had hit the UK.

Three named storms - Dudley, Eunice and Franklin - had battered much of the UK over six days in February (16-21), leaving thousands of homes without power. It was the first time since the weather warning system began in 2008 that London had received a ‘red warning’ threatening significant danger to life.

Thousands of rail services were disrupted by fallen trees, flooding and debris blown onto tracks. All trains were cancelled in Wales, and at one stage every railway line in southern England was blocked (see pages 8-11).

As well as the comments from Shapps, East Sussex MP Huw Merriman wrote to Rail Minister Wendy Morton, seeking assurances that more trains were not being cancelled since the decision to name major storms was taken in 2015.

Merriman, who chairs the Transport Select Committee, said cancellations should only occur “when safety necessitates it”, and demanded a review.

RAIL asked whether the Rail Minister had responded to Merriman’s letter seeking assurances that more trains were not being cancelled since storm naming began in 2015.

The DfT replied that the Rail Minister will respond to Merriman’s letter “in due course”.