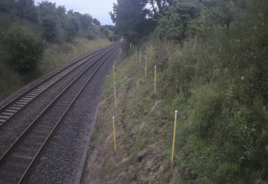 Network Rail is trialling a monitoring system that will give early warning of landslips.

Tilt meters have been installed at 26 sites in Scotland, with a further seven to follow. NR hopes that they will reduce the risk from landslips and improve the overall safety of the railway, by detecting movement in slopes above or below the line.

The system can be used to quickly flag potential issues to engineers, enabling trains to be slowed down and stopped before reaching the problem area.

Sensors detect movement in slopes when there is more than a five-degree tilt and send an alert via the mobile network to alert train controllers. Providing notifications in typically less than two minutes, the system has two banks of wireless sensors, generally spaced 2.5 metres apart with a centrally mounted pole, logger and cameras to monitor data.

NR Director of Engineering and Asset Management Alan Ross said that the company is “increasing our use of new monitoring and surveillance technologies to mitigate risks. This includes making more use of drone and helicopter surveys, and we are also trialling new weather forecasting methods for the railway.

Routes for the trial include Edinburgh-Glasgow, Aberdeen-Inverness, and the Kyle of Lochalsh line.