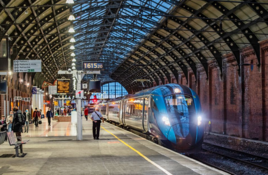 Ease of access, railway heritage, public support, and alignment “to Levelling Up objectives” are among the criteria set by the Government for the location of Great British Railways’ headquarters.

After months of preliminary jostling by rival candidates, the contest to be the home of the railway’s new ‘single guiding mind’ formally started on February 5. The Government has already said that the HQ will be outside London, and that there will be further regional offices situated around the country.

Local authorities, MPs and business groups are being encouraged to campaign for why their community should be chosen, by visiting www.gbrtt.co.uk/hq.

Deadline for expressions of interest is March 16. A shortlist is to be published by the GBR Transition Team in May, “after which a public vote will help determine the winning location”.

The competition to give a home to GBR was revealed on October 4 2021, the same day that the transition team headed by Network Rail Chief Executive Andrew Haines was announced (RAIL 942). Several places are already known to be interested, including Darlington, Swindon and York.