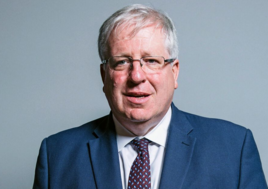 New Transport for the North Chairman Lord Patrick McLoughlin has commenced his four-year term with a full-frontal attack on the Government’s decision to downgrade plans for Northern Powerhouse Rail.

In his first statement since taking up the role on January 26, the former Secretary of State for Transport and Conservative MP for Derbyshire Dales said that the recently published Integrated Rail Plan “goes against the best interest of people in the North”.

He pledged to campaign for the full £42 billion NPR route to be delivered, as well as HS2’s axed eastern leg to Leeds.

“I have followed the work of TfN since the start - I was Transport Secretary when it was set up - and so I am delighted to be the new chair of this passionate, dedicated and visionary organisation,” said McLoughlin.

“I look forward to the challenges and opportunities ahead as part of Team TfN.

“A key focus for the TfN Board remains the need to press the case as to why its preferred approach to NPR remains fundamental to securing the long-term economic future of the North.

“The Government’s IRP goes against the best interest of people in the North and fails to deliver the step-change in rail services that is the only sustainable, long-term solution.”