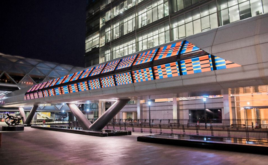 London Transport Commissioner Andy Byford said the changes would lead to reduced costs at executive level and to a single unified structure that will help TfL to become a more efficient organisation focused on achieving financial sustainability.

Within the new executive team, Gareth Powell, currently MD of surface transport, will become Chief Customer and Strategy Officer for the whole of TfL. He will also serve as nominated Deputy Commissioner.

Byford said: “Rachel will focus on working to identify how our capital improvements can be funded and financed, and will be accountable for the overall TfL budget, funding and business enabling processes. She will drive efficiency across the entire organisation, including through supply chain transformation.”

As a result of the reorganisation, TfL’s MD for Customers, Communication and Technology Vernon Everitt will leave the organisation after 14 years. He will continue to serve in several non-executive roles outside of TfL, including at Transport for Wales.

Byford added: “Vernon has played an integral role in the development of this organisation and in steering us through some of the most significant challenges we have ever faced. His contribution has been outstanding.”

TfL has confirmed that Mark Wild will continue to report to the Commissioner as Crossrail chief executive, while Matt Brown will work alongside Byford and the executive team as director of communications and corporate affairs.