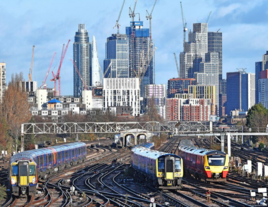 The most dramatic cuts have been implemented by South Western Railway. From January 17, it reduced the timetable by nearly a third compared with before the pandemic. Both Exeter and Weymouth direct services to London were axed, with all passengers having to change trains. Other routes were reduced to hourly frequency.

The Rail Delivery Group reported that staff absence levels were at 11% in the week to January 12, little changed on the week before. Short-notice cancellations had fallen to 2.1% across all train operators (below the annual average of 3%). RDG said this indicated that the reduced timetables were providing greater reliability.

SWR said it had been running 83% of scheduled services before the new timetable, carrying 50% of pre-COVID passenger numbers. The company has indicated no end date for the emergency level of service.