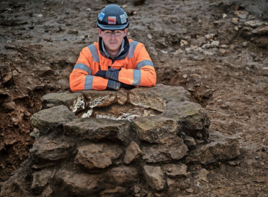 Archaeologists working on HS2 in south Northamptonshire have uncovered a 10-metre-wide Roman road running through a wealthy trading settlement, along with multiple Roman artefacts.

Over the past 12 months, a team of 80 archaeologists from MOLA Headland Infrastructure have been excavating an Iron Age village, which developed into a wealthy Roman trading town.

It has been known since the 18th century that a significant site existed in the area, but the scale and quality of what has been found was a complete surprise. It is one of the most significant archaeological sites on the project to date.

Known as Blackgrounds after the black soil found there, the site was originally an Iron Age village formed of more than 30 roundhouses alongside a road. Over time, the settlement expanded, and became more prosperous during the Roman period with stone buildings and new roads appearing.

More than 300 Roman coins have been found at the site, along with glass vessels, highly decorative pottery, jewellery and even evidence of make-up.