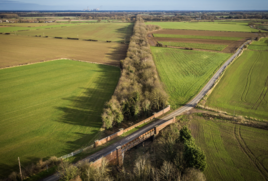 Campaigners are urging a minister to commission independent ecology audits for the areas around some 75 redundant railway tunnels and bridges that are at risk of being infilled.

The structures form part of the Historical Railways Estate which is managed by National Highways on behalf of the Department for Transport.

A major works programme at the 75 bridges and tunnels was halted by the Government last summer. It followed widespread criticism after a bridge at Great Musgrove in Cumbria, which might otherwise have been utilised for a potential link between two heritage railways, was buried in 1,000 tonnes of aggregate and concrete.

Since the pause order, National Highways has been establishing a formal procedure to review the types of work carried out at its structures. As part of this review, the Sustrans cycling charity has appraised the value of the 75 structures for future active travel use.

The HRE Group, which campaigns against the infilling, has now asked Transport Minister Baroness Vere if an independent body can also be commissioned to undertake local ecology audits of the former railway corridors that are at risk of being severed by the proposed schemes.

Ecology studies are currently carried out for each structure ahead of any works taking place, but these are usually completed by a unit within Jacobs, engineering consultants to HRE National Highway’s team.

The HRE Group has set up an online petition seeking support for the ecology audits at: www.change.org/protect-railway-wildlife-corridors