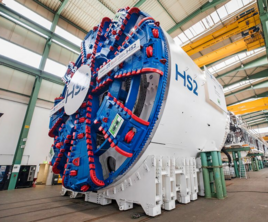 Built by German manufacturer Herrenknecht, the two TBMs are the first of six that will bore 13 miles of twin-bored tunnels underneath London. They will join eight others that will operate on Phase 1 of the HS2 project between London and the West Midlands, digging a total of 64 miles of tunnels.

The first two TBMs have been designed specifically to bore predominantly through Lambeth group (a set of geological rock strata), chalk and London clay, and are automated to install 4,220 tunnel segment rings each to create each five-mile tunnel.

About 15 people at a time will operate on each TBM, working in shifts and keeping the machines working around the clock for two years, only stopping at Christmas and Easter. A team of approximately 40 people are working to assemble the TBMs for their January launch.

HS2 Ltd acknowledged the logistical co-ordination support provided by the Police and National Highways, as the largest components of the machines were transported by road from Essex ports on vehicles that could support the extra wide loads.

Client Director for HS2, Malcolm Codling said: “The HS2 team at West Ruislip have been preparing the site for over two years to ensure it is ready to launch the first two London TBMs in 2022.

“This will be an exciting step as we begin our four-year programme of tunnelling under London.”