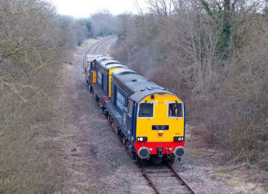 Direct Rail Services, the rail arm of Nuclear Transport Solutions (NTS), has announced details of its much-anticipated plan to sell off some of its heritage fleet of locomotives and coaching stock.

The items, which also included Mk 2 coaching stock, were offered through an online competitive bidding process which had a closing date of November 11 2021. In addition, a selection of Class 20, ‘57’ and Mk 2 coach parts were available for purchase.

All the locomotives were in the XSDP pool on TOPS, which is a computer designation for items which are in long-term storage or marked for future sale. Of the ‘37’ and ‘57’ examples, each locomotive was assessed based on its current condition and the requirements of the business.

“This is an important first step for DRS as we look at our fleet and our plans for the future,” said NTS Deputy CEO and Rail Director Chris Connelly.

“The Class 20s are really special engines to us, having been with us from the start. But things move on and a modern, dynamic rail freight operator needs a modern fleet to match our ambitions. This is the first phase, and there will be more Class 37s and some ‘57s’ offered in the future as we move towards our net carbon zero ambitions.”

DRS said all bidders have been contacted, but at this stage the company does not wish to comment on the identity of those who have been successful. It added that a list in circulation is inaccurate.