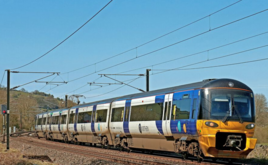 Local land taxes might provide a route to funding rail improvements in northern England, such as HS2’s eastern leg and a new line between Manchester and Leeds.

The suggestion came from Transport for the North’s board meeting in Leeds on November 24, held in the wake of the UK government revealing in its Integrated Rail Plan (IRP, RAIL 945) that it was axing HS2’s eastern leg and only planning to build half the new route that TfN wanted across the Pennines.

Greater Manchester Mayor Andy Burnham said that taxes raised off the back of increases in land values prompted by the new lines could be used to help fund them. He said this method was used elsewhere in the world, specifically citing Hong Kong.

North of Tyne Mayor Jamie Driscoll said the method was helping to fund the return of passenger services to the Northumberland Line to Ashington.

Asked by RAIL at a press conference following the board meeting whether their insistence on the east-west Northern Powerhouse Rail (NPR) project had given government the chance to drop HS2’s eastern leg, the five metro mayors stood silent with only TfN Interim Chairman Louise Gittins answering. She said that both NPR and HS2E needed to be delivered, not “bits and bobs”.