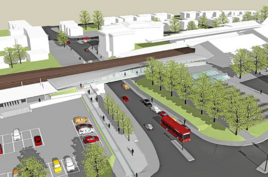 A public inquiry is under way into Network Rail’s £69 million plan to redevelop Oxford station with a new entrance and additional platform. The inquiry is scheduled to last until December 17.

A second station entrance would be built on the west side. The plan also includes a full-length platform canopy, waiting room, cafe, toilets, and offices for staff.

The entrance on Botley Road would be linked to the new platform by a subway.

The fifth platform would enable the station to accommodate services on East West Rail between Oxford, Milton Keynes and Bedford.

A new, wider rail bridge over Botley Road would include a cycle and footway on each side. It would also mean double-decker buses could pass underneath for the first time.

If the plans are approved, Network Rail would bid for further funding from the Department for Transport, which is “expected” in spring 2022. Construction could start next year and be completed by the end of 2024.