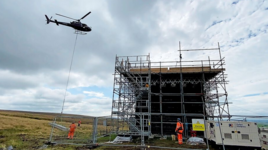 Engineered by the Midland Railway, construction of Cowburn Tunnel was completed in March 1893. The tunnel has a single ventilation shaft that was constructed in 1894 over the course of two years, and which is accessible via the moorland north-west of Mam Tor.

Men lived on the exposed moorlands to dig the shafts without modern machinery in eight-hour shifts throughout the day and night.

The shaft opens into a large chamber offset from the double-track railway lines. The chamber has become known as ‘the Cathedral’ because of its pristine stonework and ten-metre-high ceiling. A large brick enclosure with turrets protects the open shaft, making it look like a castle.