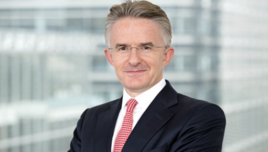 The first permanent chief executive has been appointed for an institution that is set to become a prime funder of new rail infrastructure.

Transport is to be a key focus of the UKIB, alongside clean energy, water and waste, and digital infrastructure. It is receiving an initial £12 billion in capital, with a further £10bn in capital guarantees.

Flint said that the UKIB’s purpose was “clear” and that “the opportunity to play a role in accelerating the UK’s transition to a low-carbon economy and catalysing regional economic growth is exciting”.

EXCLUSIVE: Major projects will still be vital - so we need to be ready - Haines

“The need for additional capacity will be there and frankly, all this crisis might have done is bought us a few years of time,” - NR Chief Executive

NATIONAL RAIL CONFERENCE EXCLUSIVE: Rail industry will be judged on “ability to adapt” to Williams - Haines

"It's been utterly thrilling"

Carne discusses the role, the successes and failures, and how the infrastructure company needs to evolve