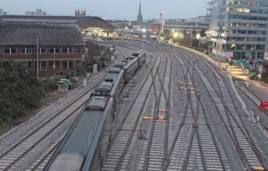 The project involved removing 1960s-era track and infrastructure and replacing it with a layout that enables trains to enter and depart from the station more efficiently. It simultaneously increases the station’s capacity and reduces congestion.

An old signalling gantry was removed last year and replaced during the Christmas 2020 period.

The ground-breaking element of the £132 million Department for Transport project began on July 10. Work continued around the clock for eight weeks until the evening of September 3, to allow all lines to reopen and full services to resume on the following morning.

NR staff used 50 engineering trains to replace over 5km (3.1 miles) of track, install more than 300 track panels, and lay down around 26,000 tonnes of ballast stones to support the track.

An additional line has been introduced to enable a future suburban service to be established as part of the West of England Combined Authority (WECA) MetroWest scheme.